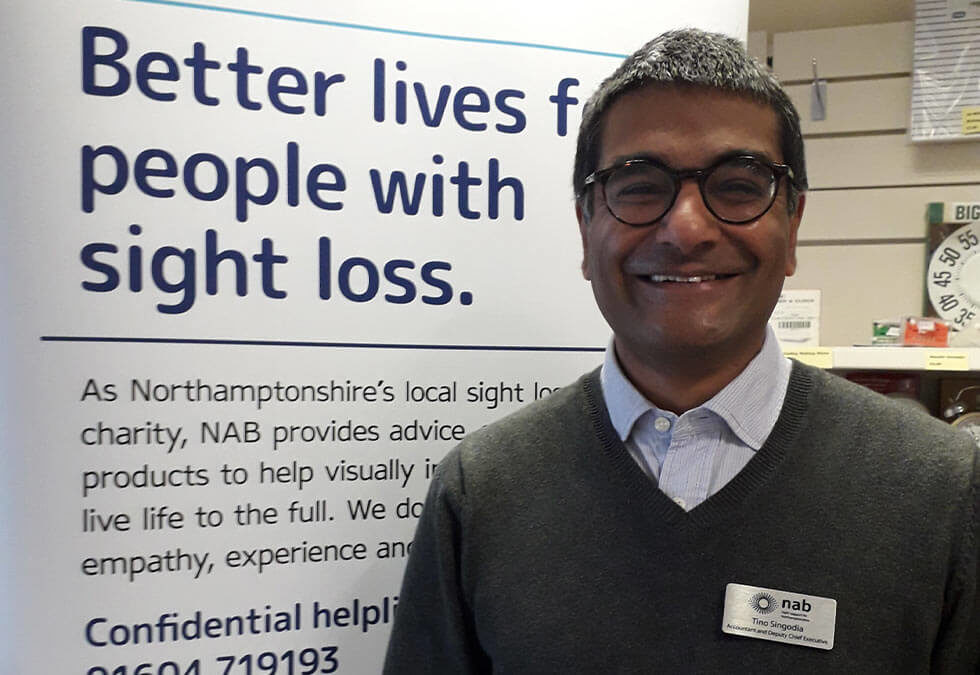 NAB has appointed Tino Singodia as its new Chief Executive, the sight support charity announced today, Tuesday 22 October 2019, at its AGM. The current CEO, Alexander Lohman, will stand down at the end of 2019.

Tino – who is NAB’s current Accountant and Deputy Chief Executive – has been involved in the leadership and management of charities for more than ten years, including international education and medical charities, having previously trained and worked in commercial organisations in London and Edinburgh. He is a Chartered Management Accountant and lives in Kettering with his wife and 4 children.

Alexander Lohman’s contribution to NAB’s work over the last 8 years – five as Chief Executive – was formally recognised at the charity’s AGM today.

“I am delighted to be given this opportunity to lead such a vital local charity and champion the needs of visually impaired people in Northamptonshire. I am looking forward to working with our colleagues, trustees, partners and donors – and importantly blind and partially sighted people themselves – as we deliver our ambitious new Strategic Plan.”

“It has been a pleasure and privilege to serve as NAB’s Chief Executive for the past 5 years and I’m incredibly proud of what we have achieved during that time. Whilst it’s with a heavy heart that I have decided that it’s time to move on, what makes leaving to pursue new challenges a little easier is knowing that with Tino at the helm I am leaving NAB in very good hands.”

Tino will take over from 1 January 2020, with Rhian Williams – the current Marketing and Fundraising Manager – becoming the Deputy Chief Executive and Julie Martin heading up Service Delivery. Together, Tino, Rhian and Julie become the new Management Team of 3.