One small step for man, one giant leap for mankind! What’s Spaceflight got to do with being visually impaired? Leo O’Rourke sheds some light…. 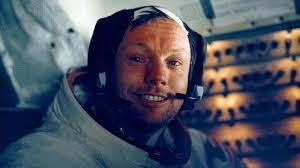 50 years ago today, July 20, the world heard these famous words as Neil Armstrong lowered onto the surface of the Moon: “That’s one small step for (a) man, one giant leap for mankind.”

On July 20, 1969, Neil Armstrong – and Apollo 11 Lunar Module pilot Buzz Aldrin – became the first people to land on the Moon. The next day they spent two and a half hours outside the spacecraft while Michael Collins remained in Lunar orbit in the command module.

But what did Neil Armstrong have to go through to become the first man on the moon? It’s easy to think that these Astronauts achieved so much simply through privilege, good luck and fortune. The reality is very far from this – Neil Armstrong’s space career was characterised by set-backs, risk and personal tragedy.

This should prove a powerful and inspirational message for anyone going through difficult circumstances or challenging times. You should be proud of any personal goal that you set yourself and accomplish – however big or small! As a visually impaired person, this could be anything from cooking a fried egg correctly for the first time, to travelling solo on a train journey. For sighted people small achievements like this can seem simple but for a blind or partially sighted person, taking on these tasks and achieving them requires dedication, determination and perseverance.

Armstrong, a graduate of Purdue University, studied aeronautical engineering and became a naval aviator but in 1951 he was hit by anti-aircraft fire and was forced to bail out. He eventually joined the astronaut program in 1962 and was command pilot for his first mission, Gemini VIII, in 1966. But Armstrong had to overcome huge personal and professional tragedy along the way losing his good friends and colleagues, Roger, Ed and Guss when Apollo 1 blew up in 1967 (pictured below) and then losing his daughter, Karen, to cancer in 1962.

Clearly Armstrong was a highly admired and respected individual who overcome numerous obstacles and challenges to achieve one of humanity’s greatest feats by landing on the moon. Considering this event happened in 1969, it was a ground breaking moment and changed the course of space and science understanding. This demonstrates how much determination, dedication, focus and perseverance was needed to achieve his goal.