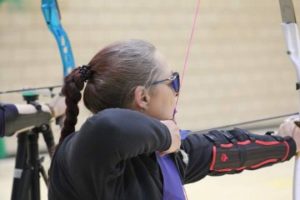 Congratulations to visually impaired archer Deb Wright of Raunds who has retained her two national titles.

Last month she competed in the British Blind Sport National Outdoor VI Championships in Shropshire, heading off the competition to retain the title she has held since 2015.

Earlier in the year, she retained the Indoor Championship title, which she first won in 2016.

Deb, who only took up archery three years ago, competes in the “recurve” category which means she uses the lighter, more traditional style of bow. Its name derives from its shape. The tips of the bow curve out towards the target.

To add to her year of achievement, she also came second in the VI Open category at the National Disability Championships in June – which she won last year. This category is open to VI archers using recurve and the bigger, more elaborate “compound” bows.

Deb shoots regularly with the Pemberton Maid Marions and practices with her local club Archers of Raunds.

After her sight started to fail, Deb became quite depressed and isolated. She took up the suggestion of archery and got the bug. “I still have the same excitement for the sport as I had on my first taster session,” she says. “It’s a really accessible sport and I’d encourage any visually impaired person to give it a go.”